Day 2
This morning was super adventure day for our group! We cycled via Mekong View Bike Lane. The distance of this leisure biking is 15 km from the Landmark of Nakhon to the 3rd Thai-Lao Friendship bridge. Unfortunately the cycling time was only 1 hour... But we decided to make a bike trip here in future to show this beautiful scenery to Korean adventures. 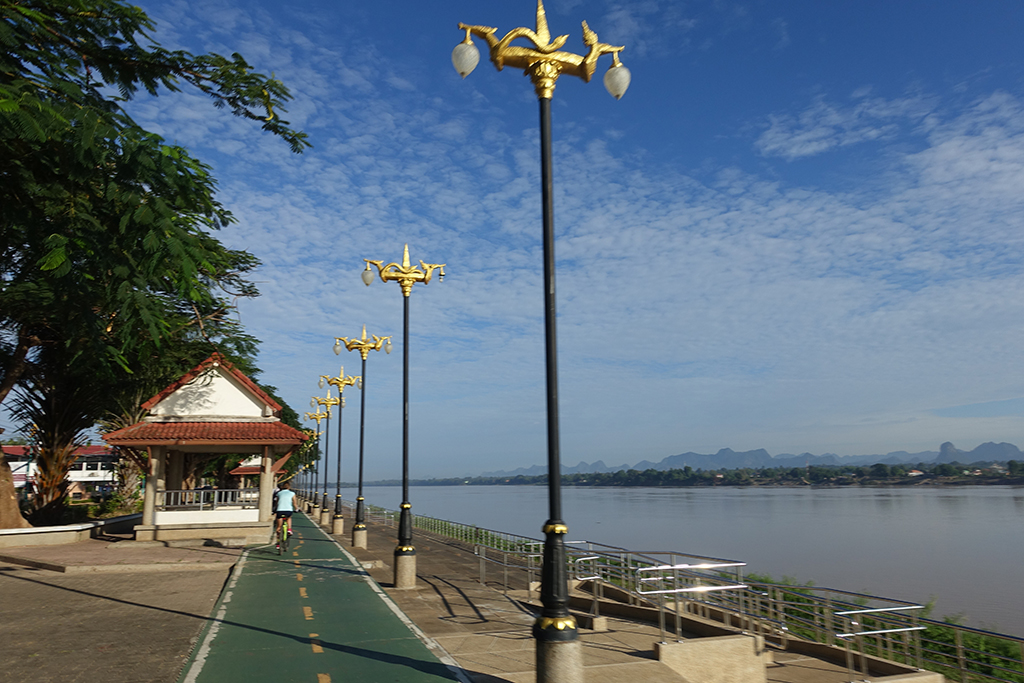 (Well-paved surfaces and easy to ride) 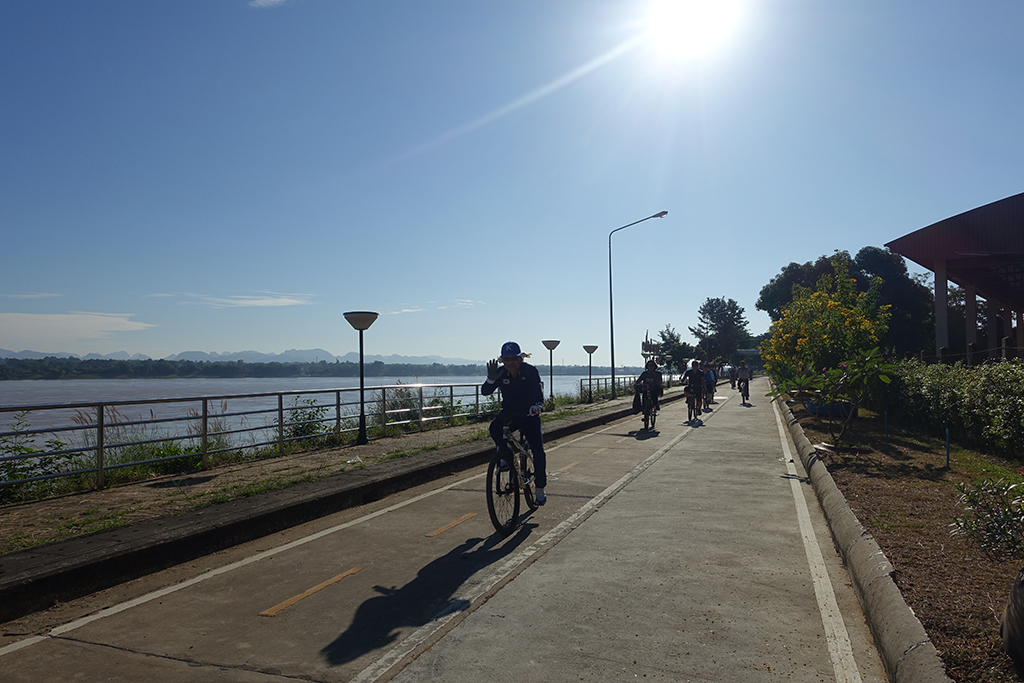 (Cycling in the morning along beautiful river. What could be better for morning person?)
After morning we visited Phra That Phanom, an impressive 57-meter high chedi. According to legend, the Lord Buddha travelled to this land and directed that one of his chest bone relics be enshrined in a chedi to be built on this very site. The first temple structures were built 8 years after the Lord Buddha’s nirvana by Monk Maha Kassapa with supports from five Kings of the Sri Kotrabun Kingdom. The chedi is of high importance to Buddhists in Thailand, Lao PDR and people in the middle Mekong region. Phra That Phanom is a glorious and living sacred monument and a centre of spiritual inspiration for harmony and peace among the people in this region. 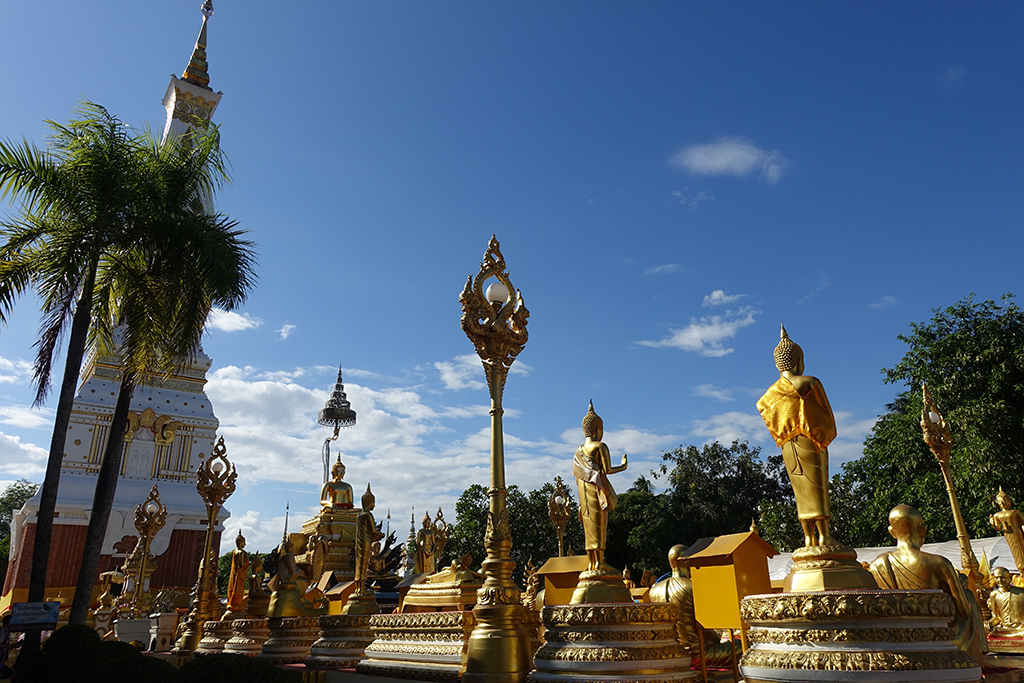 (Phra That Phanom)
Towering over its surroundings at 57 metres high, the sacred Chedi of Wat Phra That Phanom is the oldest in the North east of Thailand. There are hundreds of worshippers… We were the only foreigners and people smile and make us feel very welcome.
Before get the dinner we arrived to depart for Ban Sok Maew, a village of Tai Kha ethnic group of Nakhon Phanom. According to anthropologists, Tai Kha is one of the oldest ethnic group of humankind to settle along the Mekong.  Tai Kha is believed to derive from ancient Khmer after its ruin thousands of year ago. Lives of Tai Kha people are simple and they rely on agriculture for a living. 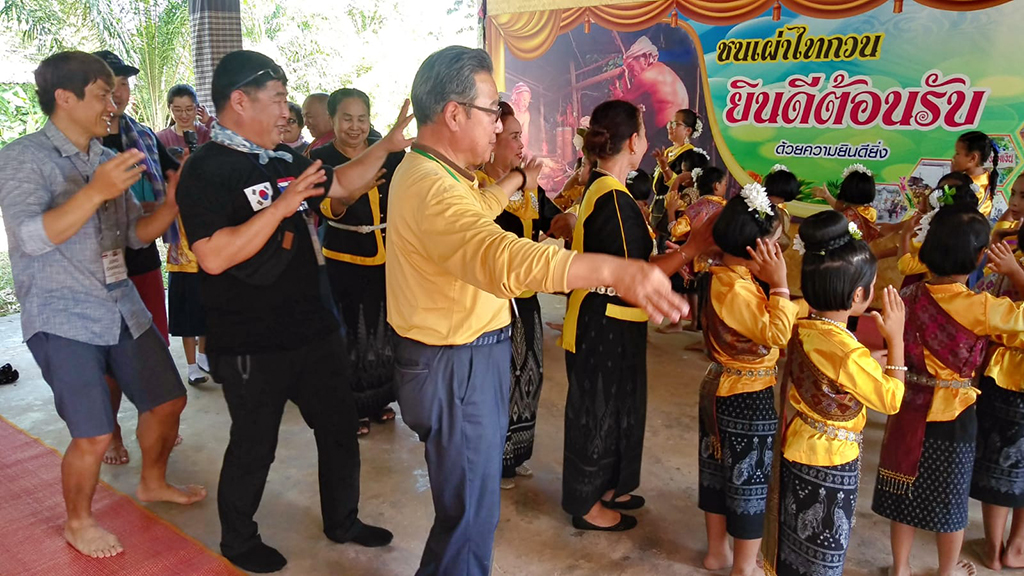 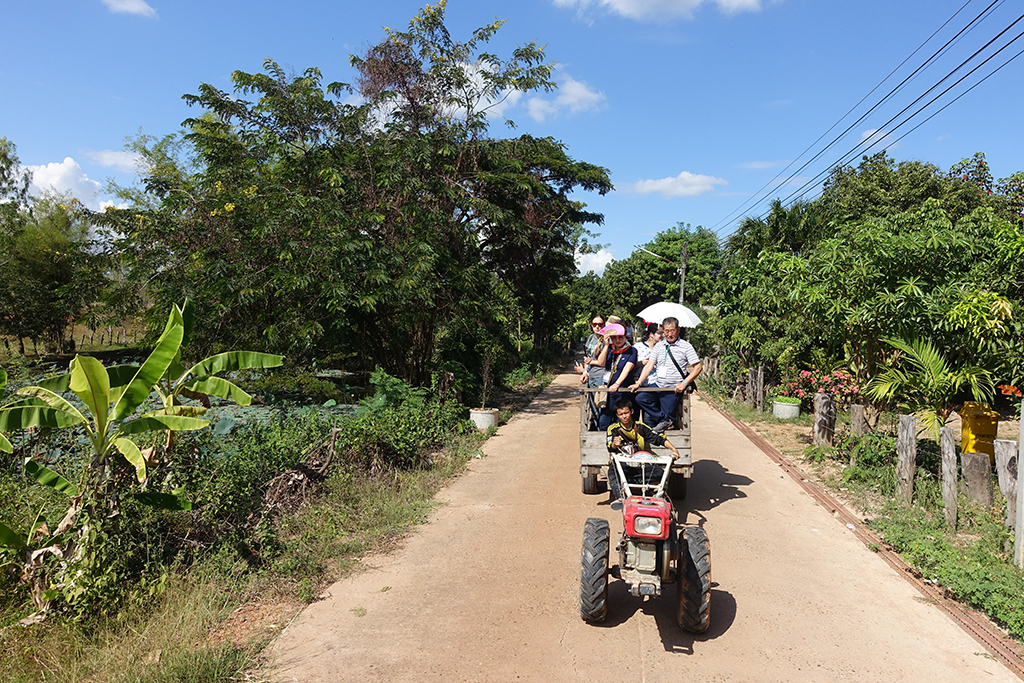 (Local taxi^^)
Then we experienced ethnic activities. One of them was Yao ceremony.
Originally, it was believed that sickness and accidents were caused by the spirits or as divine punishment. The remedy for these ills was in the form of an assortment of ceremonies to redress perceived wrongs and appease the spirits. Dance and music were tools with which humans could communicate to the spirit world through the medium of the group leader or the person who accepted responsibility for communication. These mediums, or Mor Yao, were important people in the Tai Kha community and took responsibility for the joining of body and soul by performing and dancing according to their abilities. Modern ceremonies are not only for curing the sick but also for cultural exchange and learning experiences. 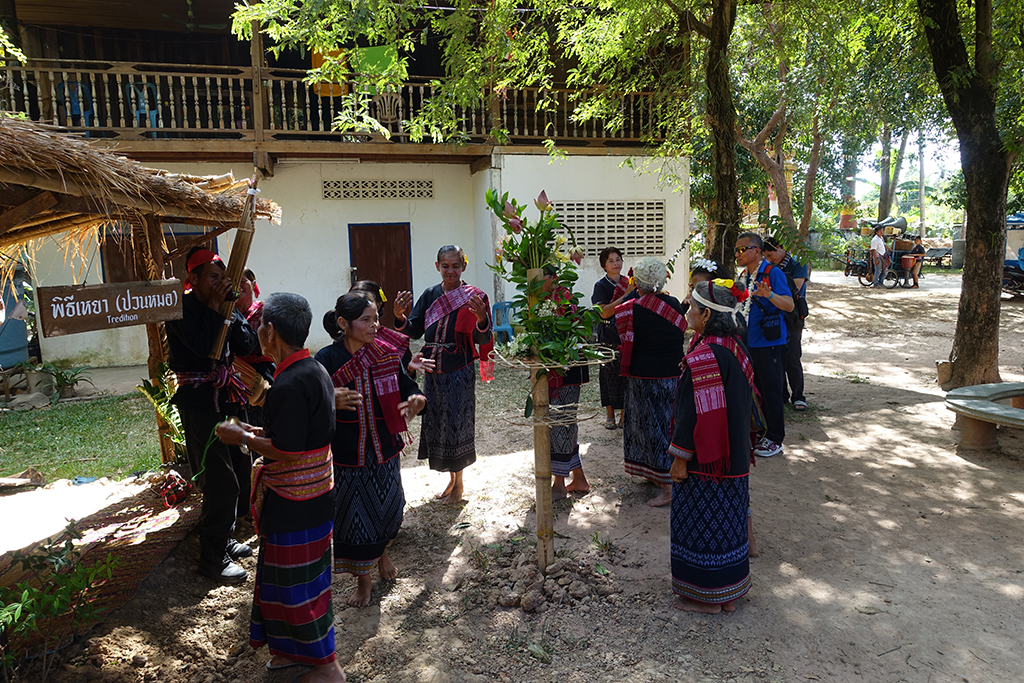 (Thai dancing ceremony)
Day 3
In the morning our group visited Savannaket town (the 2nd largest town in Lao PDR) via the 2nd Thai-Lao Friendship Bridge.
Savannakhet sits on the Mekong River, bordering Thailand. It is also known as Kaysone Phomvihane, the name of the former president of Lao PDR who was born here. Legacies of the French colonial period can be found all over Laos including Savannakhet from great tasting baguettes to Catholicism and the architecture. The city of Savannakhet is full of fine French colonial architecture. 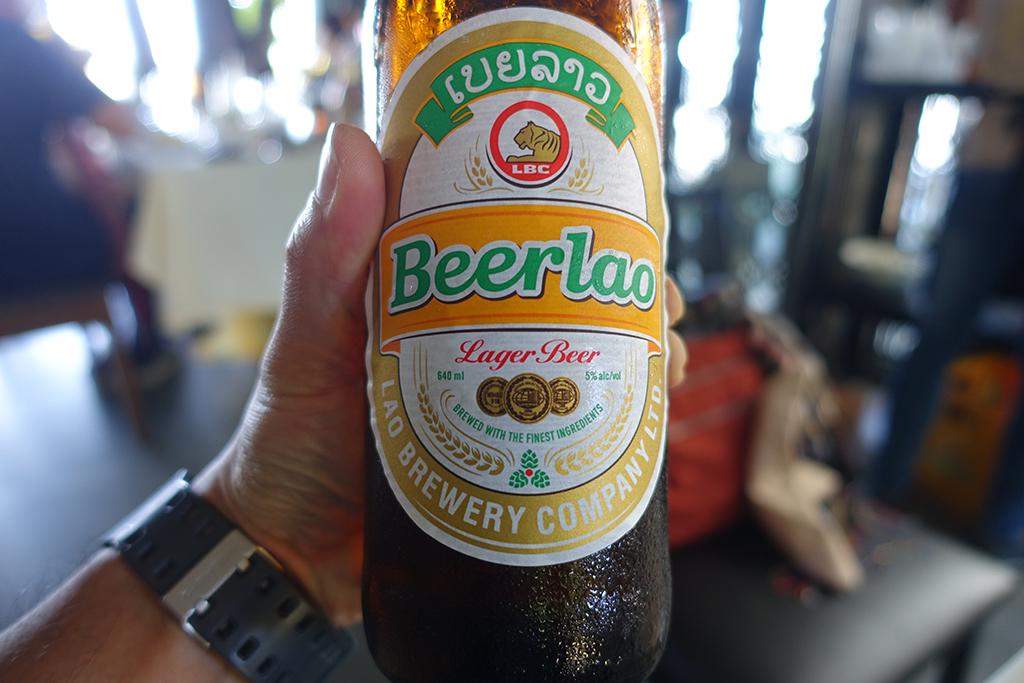 (The most famous Laos beer - Beerlao)
We saw one of the oldest temple in Laos - Phra That Ing Hang.  That Ing Hang Stupa is about nine metres high with beautiful carving and decoration. It’s reported to be built in 16th century to house a relic of Buddha’s spine. That Ing Hang is a sacred stupa, an important place of worship not only for Laotian Buddhists but also Thai Buddhists who live in northeastern Thailand. Women may be required to wear traditional pahsin (Thai / Lao-style sarong) before entering the temple grounds. 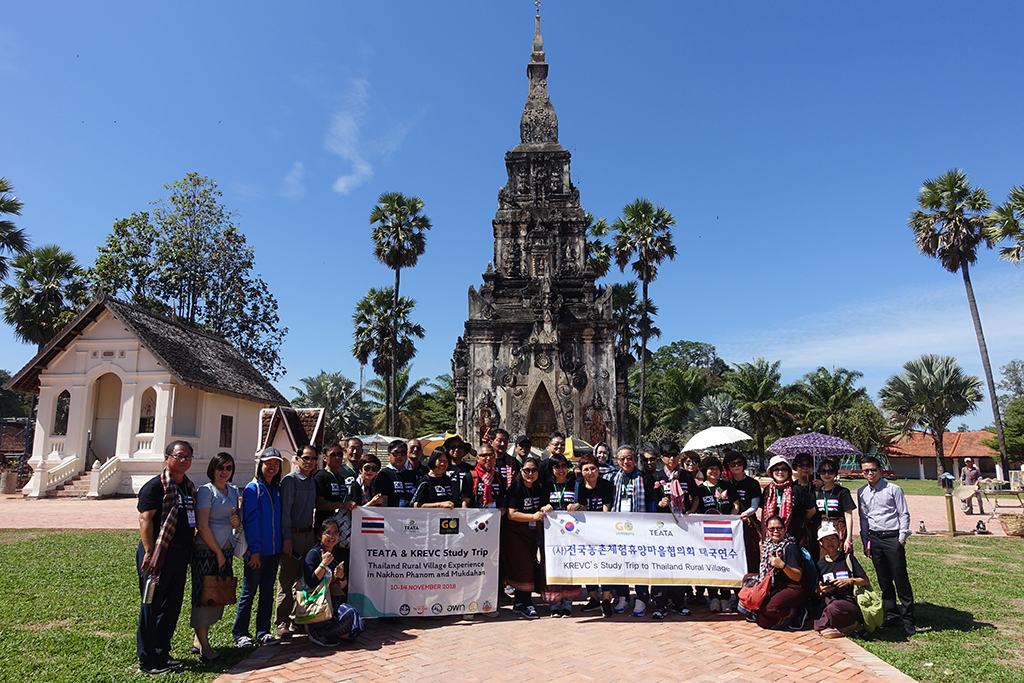 After sightseeing in Laos we went back to Thailand and spent time in homestay of Ban Phu village. Ban Phu or “mountain village” is situated on a hill surrounded by lush, green mountains 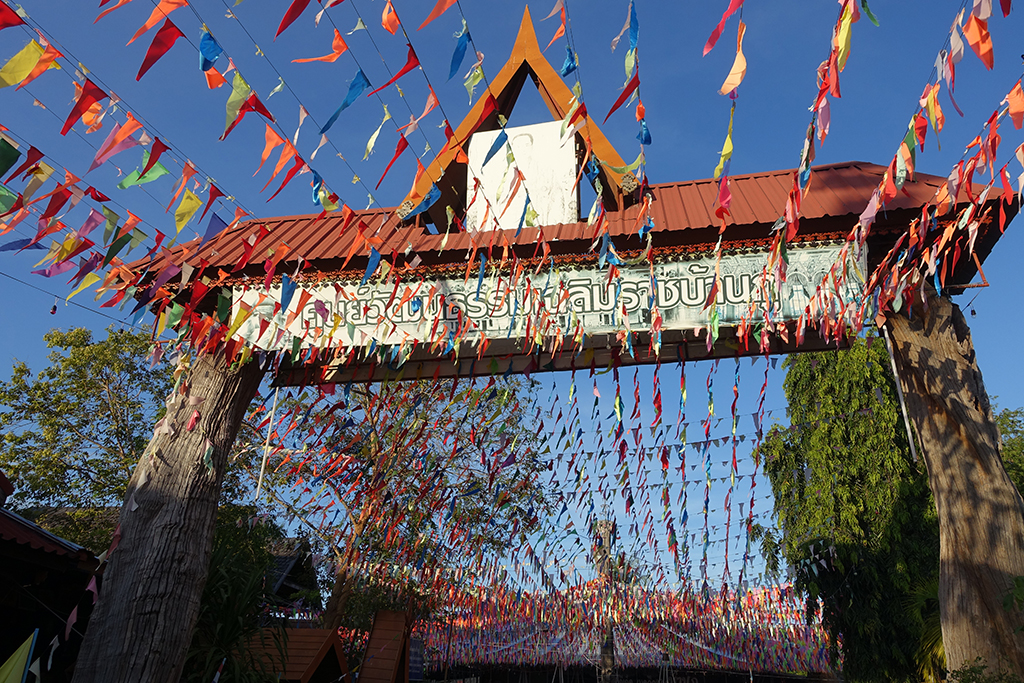