The Gobi reveals itself in pockets of amazing scenery, bridged by vast stretches of desolation where smartphone signals die and silence saturates. Few experiences bring together offbeat adventure and epic road-tripping quite like bouncing through Mongolia's Gobi Desert in the rear-facing seat of an off-road van. Get ready for the adventures and follow it ever deeper into the mystery.
Gobi, also called Gobi Desert, great desert and semidesert region of Central Asia. The Gobi (from Mongolian Gobi, meaning “waterless place”) stretches across huge portions of both Mongolia and China. Contrary to the perhaps romantic image long associated with what—at least to the European mind—was a remote and unexplored region, much of the Gobi is not sandy desert but bare rock. It is possible to drive over this surface by car for long distances in any direction.
Prepping in Ulaanbaatar 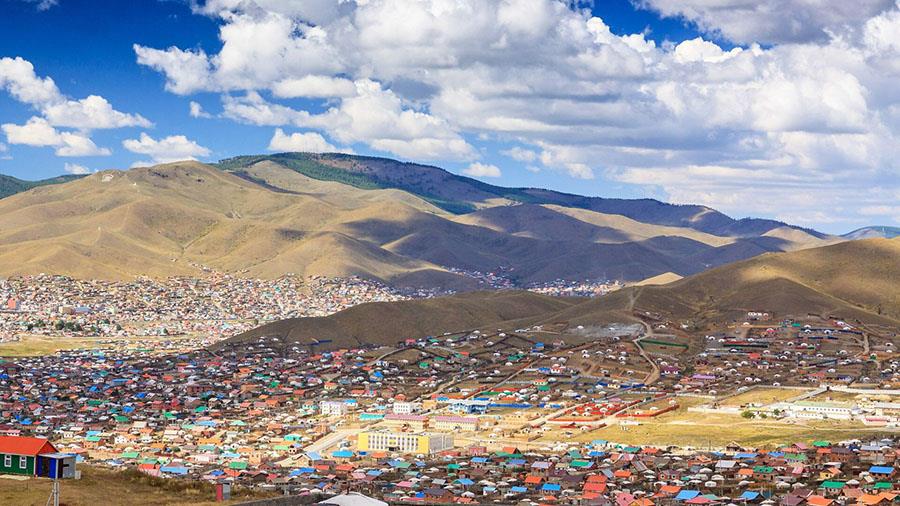 Before any of the photogenic bits, the adventure starts in Mongolia’s capital city, Ulaanbaatar. Ulaanbaatar (Улаанбаатар), also known as Ulan Bator or simply just UB, is the capital of Mongolia. With a population of around 1.3 million, it is the largest city in Mongolia, standing as its political, commercial, industrial and cultural hub. You’ll need to hire a van and driver, possibly source a group of travellers to fill it with (and share costs), and get enough supplies to keep the lot of you in good shape for the duration.
You’ll need to negotiate a set route or daily distance with your driver, either agreeing on the places you want to go or just driving each day in the direction that seems most promising. Sometimes drivers will have suggestions for a route based on the weather and road conditions, or places where they know they can make camp or find a ger-stay. Stock up on food (otherwise it’s camel cheese for a week!), fill up with plenty of petrol, and it's time to hit the Gobi. Prepare to be covered in dust, absolutely battered by a combination of rough roads and a vehicle with no handles, and often hundreds of kilometers from the nearest flushing toilet.
Valley of the Vultures 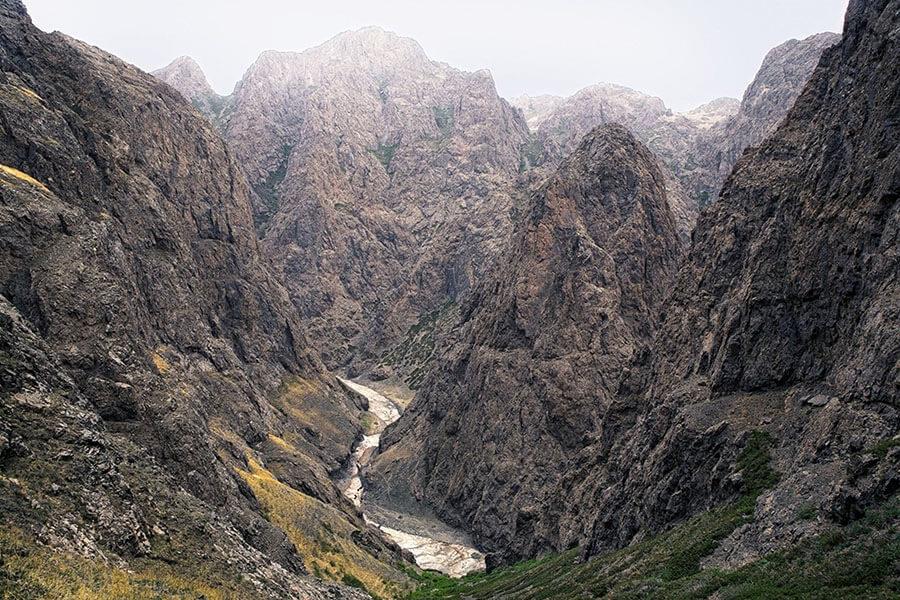 Named after a scavenging bird of prey, Yolyn Am (Vulture Valley) is a beautiful gorge that cuts through Zuun Saikhan mountain of The Gurvan Saikhan mountain range in Omnogovi province. A brook that flows through the gorge used to be frozen on the surface all year, but due to global warming, it began to melt during summertime. There are many spots in the gorge that sunlight does not reach, making it cold to almost a minus degree. Which then creates a cold breeze reminiscent of winter that will cool you down in the hot gobi desert.
Amidst the wide-open spaces of the Gobi, neither the ice nor the namesake Yol vultures stick around very long these days, but it still makes an easy day hike (or a challenging scramble) and the craggy canyonlands make a nice change of scenery from the desert landscapes that characterize most of the region.
Flaming Cliffs Bayanzag 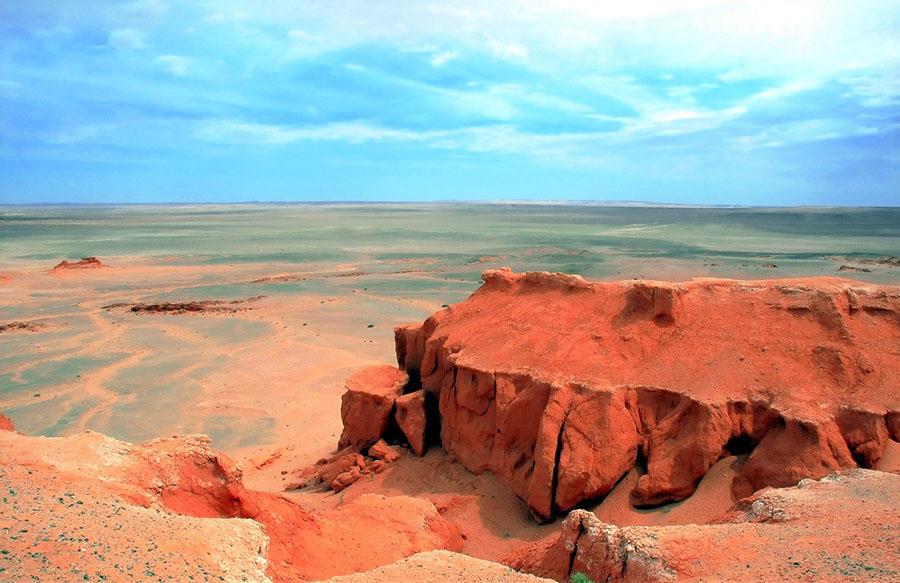 Bayanzag red sand cliffs, today better known as “flaming cliffs” due to their colours ochre and red, are located about 100 km (62,14 miles) at the northwest of Dalanzadgad. Bayanzag means “rich in saxaul”. This thorny shrub measuring approximately two meters high proliferates in the surroundings and is a good source of food for camels. This plain has many sedimentary sand cliffs where many dinosaurs’ fossils have been found. In 1922, the paleontologist Roy Chapman Andrews was the first to discover dinosaurs’ bones and eggs. Though the excavations have long moved on, the desolate desert that stretches to the horizon and beyond continues to draw travellers looking for adventure and beautiful sunsets.
Climbing the Khongoryn Dunes 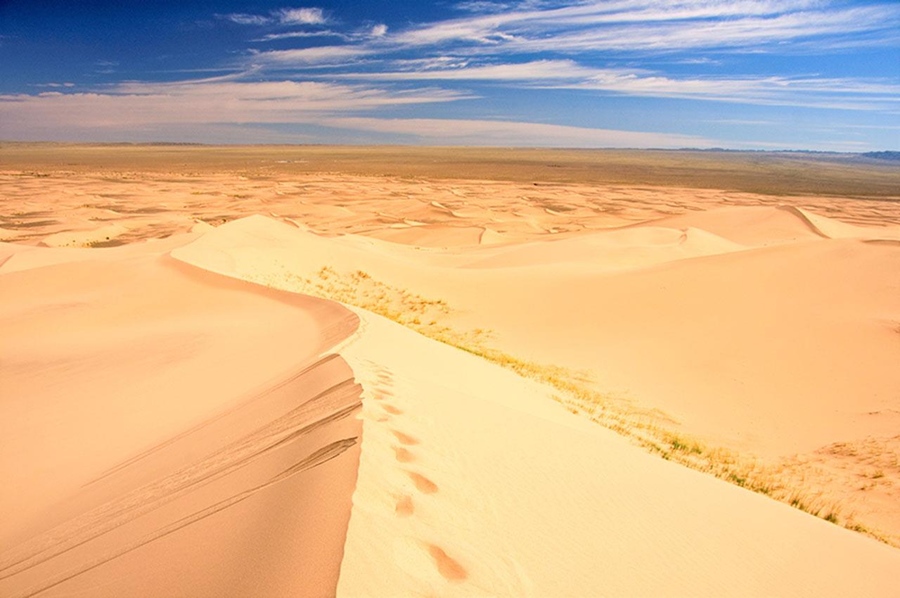 © Tim Makins
Khongoryn Els, also known as the Duut Mankhan (Singing Dunes – from the sound they make when the sand is moved by the wind), are some of the largest and most spectacular sand dunes in Mongolia. The Mongolian Gobi at Khongoryn Els is the desert you've always dreamed of: sand dunes up to 300m high and stretching nearly 12km into the distance. Ride a camel from the nearest nomad camp to the foot of the dunes, climb to the top as your steps slide backward down the sandy slope, and stare out over Asia's largest desert. Just don't turn your back on that camel for too long – they're decidedly cranky and might not be waiting for you when you get back.
Exploring the Ruins of Kharkhorin 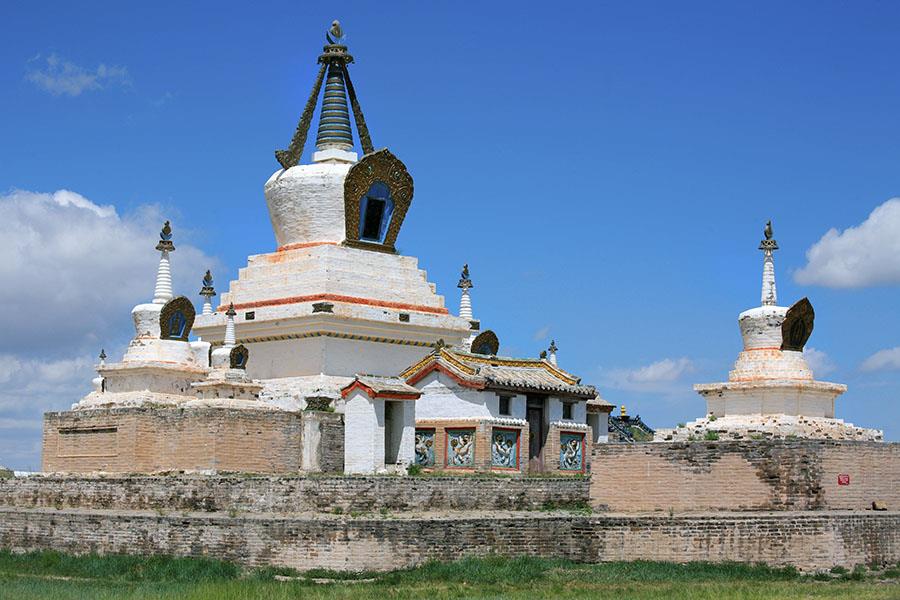 © Sophie Dauwe
While actually outside the Gobi, the Erdene Zuu Khiid is absolutely worth a detour on the drive to or from the desert. Located on the site of one of the once-prosperous 13th-century capitals of the Mongol empire, the city withered after Kublai Khan abandoned the site in favour of the area we today know as Beijing. Erdene Zuu (Hundred Treasures) was the first Buddhist monastery in Mongolia. The monastery itself, constructed to mark the 1585 establishment of Tibetan Buddhism as the official state religion, is believed to have been built from the repurposed stones of the ancient city. Though the modern monastic community is significantly smaller than it was at its historical peak, even just the approach to the impressive fortress-like wall of stupas is worth the drive.
Sleeping and Eating 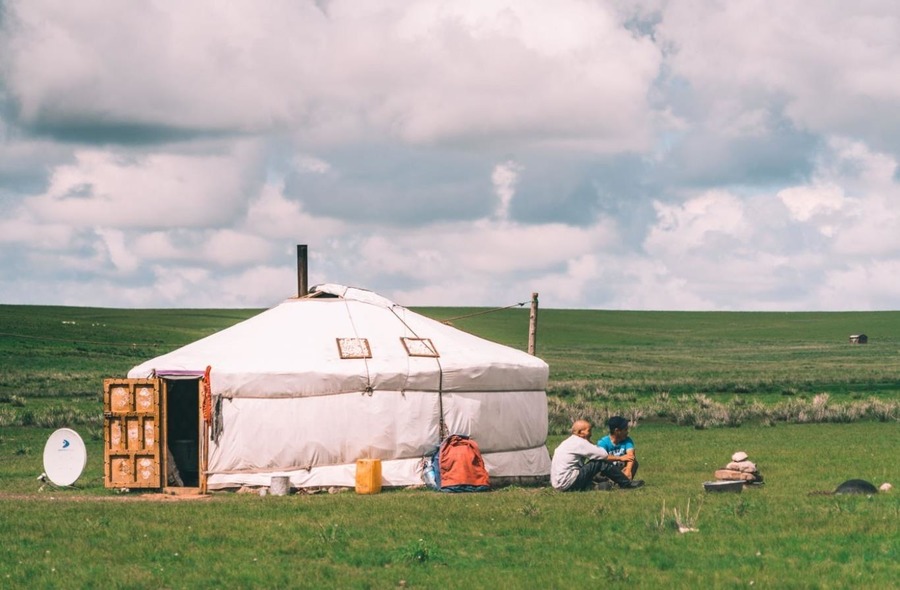 Though you might occasionally wind up camping wild in a tent, the end of most days will see your driver steering towards the nearest ger (yurt) camp. These traditional nomad tents (similar to the yurts found throughout Central Asia) dot most of rural Mongolia, including the Gobi. A stop will almost certainly include a bowl of tea or airag, a slightly fermented horse milk, while a night spent in the ger can easily turn into a meaty feast...followed by tea and airag.
Most of the meat, milk and dairy in Mongolia is from home-grown livestock raised and consumed by these same nomad families; but while the rest of the country abounds in horse, goats, and sheep (and even the occasional reindeer), the Gobi region also relies heavily on camels. That means camel meat, camel milk, and the dreaded camel cheese. The cheese, actually a hardened curd but very rarely referred to as such, is particularly unusual. Not only does it taste like sweat smells, but it's also hard enough that it takes serious commitment to finish even a single piece. Worth trying exactly once, if only for the experience.
Source: hiasia.xyz